Love in the time of Covid-19: a letter of thanks to Albert Burneko (and Drew Magary) 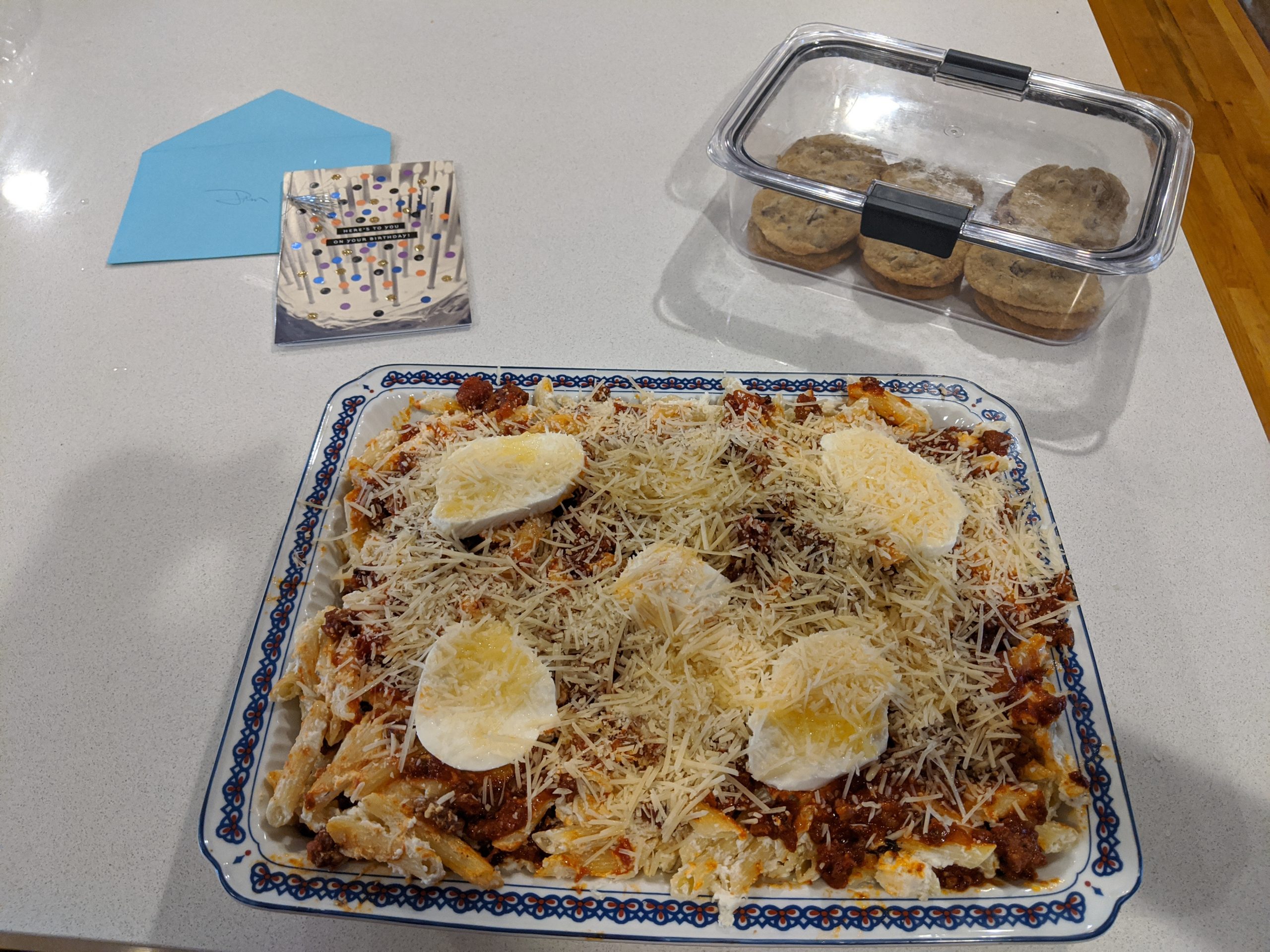 A birthday feast in waiting

Peter Gabriel is blasting on the stereo, (sing with me! …wanting contact… ) while my husband works on this Saturday afternoon, mapping out yet another roll-out for yet another set of changing protocols for his employer, a Central Illinois health care system. He’s managing the doctor’s offices — other folks have the hospitals. But for the moment, here, an hour before all non-essential businesses close and everybody is on a stay home order, the doctor’s offices are where the action is.

I’ve just finished assembling tonight’s dinner, a riff on Albert Burneko’s Baked Ziti recipe, which, I swear, as God is my witness, I always thought was written up by Drew Magary, and was informed to the contrary only after the subject of this essay read it. I’m here to say thank you, because this recipe has become an institution in our home.

A long time ago, my husband’s grandmother gave us a beautiful lasagna pan, and her unbeatable recipe. It’s not every day an Irish girl marries a Polish/Lithuanian boy and scores an amazing lasagna recipe, but Rosemary was born Ciancio, and so I won. As in many families, I tend to do the day-to-day cooking, and Jim likes to do Special Occasion cooking. Over time making lasagna turned into a family event, one in which my hubby took over and wrangled our young kids into helping. The notion that something else might go in that lasagna pan was well-nigh unthinkable.

But then life changed. Our kids grew up. Jim left his family medicine practice to become a high-powered executive at the health system, and started keeping high powered hours. Also, Albert Burneko started writing for Deadspin’s delightful spinoff, Foodspin. I don’t remember whether it was Jim Sr. or Jim Jr. who first spotted the ziti recipe, but it was decided we would gather to make a double batch, so that the three households we then represented (number 1 son, the data guy, had his own place, number 2 son was living with third-born daughter while they were both in med school) would have leftovers.

This ritual eventually became the thing we do to celebrate my husband’s birthday. He turned 59 yesterday, and we’ve tried unsuccessfully to organize at least a partial family gathering for zitifest for each of the last weeks. For a while, it looked like we would be able to do it last weekend, so I went shopping.

Have you ever read recipe comments? People have the audacity to complain that when they made some weirdass substitution, the results were not good. This is not that kind of recipe comment.

Because as I went on my hunting and gathering mission, I was thwarted at every turn. No whole canned tomatoes, just crushed ones. No pecorino, just parmesan. No hot Italian sausage, only mild. For pete’s sake, no ziti, only penne! Years of unremarkable but steady experimentation in day-to-day cooking made me think that probably, all this would work anyway. After all, I still had ricotta, I still had fresh mozzarella, and this recipe is all about the cheese.

We had to cancel our gathering. Daughter is emergency staffing the internal medicine service at her residency tonight. Medical son is out in Seattle, fighting the battle there. Data son is on standby to run around for his grandparents. Jim, who had really been looking forward to resting his brain with a little time in the kitchen, asked me this afternoon if I’d make the ziti – more phone calls had been added to the schedule and he just wasn’t going to have the time.

It’s probably just as well that the medicos are working too hard to do the cooking. The hue and cry which would have gone up as they saw the substitutions!!!! We had a brief moment of tension when Jim came down and asked why the ragu was so red. “I bought fancy Italian tomatoes” I replied, which is not untrue, but basically, things change a lot when you use pre-crushed tomatoes. Don’t do this unless it’s an emergency.

But here’s the thing. This recipe is not just another pretty face, held together with a delicately balanced set of exotic ingredients. This recipe is a robust institution, which, I am here to say, has totally stood up to this damned virus. Despite all the substitutions, it tastes and smells HEAVENLY. It’s standing by, ready to nourish the guy who has lost 10 pounds in the last 2 weeks, and giving me the sense that I am serving the cause in some small way.

So, from the bottom of my heart, thank you Albert Burneko, and (also, Drew Magary, just in case you were involved somehow.) Our plan is to dine early, so as not to bum out our not-working kids during our virtual family game night. Because I’m pretty sure they will otherwise be able to smell it through the TCP packets.

2 thoughts on “Love in the time of Covid-19: a letter of thanks to Albert Burneko (and Drew Magary)”