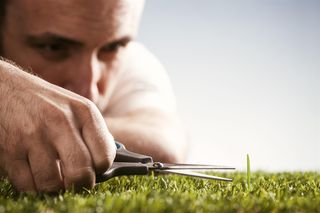 Note from the author: When the call went out for posts about perfectionism, anxiety, and OCD among the gifted, I responded that I thought I had written a recent rant on the subject, but couldn’t recall where. To my surprise, I found it here, on my blog site, unpublished, because I didn’t think it was good enough, yet. The irony of this situation does not escape me!

A long time ago, in the company of some online friends, I founded an email list for the support of families of gifted children. It was 1997, and starting to be on trend for there to be a web site to serve as home for resources that a community in conversation on email might wish to share and consult. So I learned a bit of HTML, and GTWorld was born. Life got busy, and I never have given that site a facelift. Hopefully it now looks charmingly retro rather than simply sadly out of fashion!

Most of the conversation on raising gifted kids has moved elsewhere, as the children we originators were comparing notes on raising have long since grown and flown. I still get the occasional note from someone who finds the website helpful, so I keep it online. This also means that I occasionally receive requests from various sources to link to a resource they think the (now mostly a ghost-town) community would find useful.

A while ago, I received such a request from a counseling organization with a special interest in helping people who suffer from perfectionism. It featured a link to an article which has a number of helpful observations on how one might overcome the hardships which accompany this trait and become “happily imperfect.” In general, to qualify for a link on GTWorld, a resource has to have been recommended by a community member, so I was unlikely to accede to this request, but I’m interested in the subject, so took a peek.

This organization is located in an area where there are many affluent communities, featuring “hothouse” highly-competitive public schools, in which there is an unusually high percentage of gifted kids, and where pressure has been building over recent years for students to receive admission to a handful of “top” universities and colleges. So I’m glad these services are available, as they are sorely needed.

But the article revealed a glaring misunderstanding of this population, by defining “maladaptive perfectionism” as “an unrealistic attempt at reaching excessively high or impossible goals,” and then offering as an example “being the number-one student athlete and the valedictorian and getting into the ‘best’ university…” “…One person’s ability and energy to obtain, let alone remain at, that level of excellence over a long period of time—that’s impossible to do.”

Um, no. Items which constitute “unrealistic” attempts at reaching “excessively high” goals is a highly individual call, and for many of the gifted, the goals mentioned are actually well within reach for the mildly motivated.

Because here’s the thing. Contrary to stereotype, it’s not at all unusual for the most talented athlete to also be an intellectually gifted individual. In fact there are a preponderance of top athlete/valedictorians at the “top” colleges.

Gifted children in supportive households are often well-equipped to excel at most things they try. The narrow demands of school and extra-curriculars can often be a lighter-than-usual burden for them.

So the counselor’s assertion that performing across multiple domains with excellence is not possible rings false. Even kids KNOW that some people have the talent and drive to pull off coming out on top of everything for years on end. Many of them have been doing just that themselves for years by the time they get to middle school.

Being on top of everything, all the time, is what happens when a child is not presented with sufficiently challenging work in school. Some bored kids in this position try to create some challenge for themselves by taking on perfectionism – striving for 100% on everything, or finishing in the least amount of time. (One young man of my acquaintance strove for what he called “the perfect A” — the 93% which garnered the top grade but did not involve over-studying!) Others develop a sense of entitlement to things coming easily, and conclude that anything that isn’t immediately grasped must not be that important, after all.

Perfectionism is one fairly effective approach to dealing with an under-challenging environment. It artificially raises the level of the challenge, making a task which is otherwise not particularly engaging a little bit more palatable. On the face of it, it sounds like a great idea. We want our kids to challenge themselves, right?

The problem comes when one’s sense of self becomes tied up in always being the one on top, and on always turning in an outstanding performance. For too many gifted children, their first experience with failing to achieve an important goal is the failure to gain admission to the college of their choice. It turns out that there is a heck of a lot of randomness in that system, driven in part by the ridiculously small number of very fine schools which gain the reputation as “top” and by the fact that there are many times more qualified applicants to these schools than there are spaces available. It doesn’t help that for many parents, a sparkling admission letter to the “right” school is regarded as a referendum on THEIR success on the child-rearing project. Parents are subject to maladaptive perfectionism, too!

The lucky/resilient/well-supported kids in this situation matriculate to their “safety” school and discover that there are actually great learning experiences and like minds outside the hallowed tier of “top.” They also find out that there are almost always gifts in adversity. The less lucky ones take on “failure” as their new identity, and struggle to understand how it might be possible to go on, at all. Every year there are suicides among college freshmen, who, confronted for the very first time with minds keener than their own, and heightened intellectual demands which seem insurmountable, conclude that they do not have what it takes to thrive in the world. They have no idea how to be “happily imperfect” because turning the perfect score or the top performance has been what they did, without a whole heck of a lot of effort, for their entire young lives.

It doesn’t have to be like that. We can warn our kids, as my dad did me, that “The air gets thinner as you progress upwards.” We can share with them our stories, in which sometimes we get to work with brilliant people and that it can be a lot of fun to NOT be the smartest one in the room. We can talk frankly about how life intervenes, and illness and other crises demand energy which isn’t available for the pursuit of excellence in our work or studies, and how there are seasons to things — as young parents have to shift their focus to their offspring, we all get an education in how to figure out what constitutes a “good enough” performance because perfect falls right off the table. We can also share insights like those in the article below, which make clear that despite that vaunted “potential” we hear about as we go through school, it’s actually very rare for even a brilliant individual to achieve great fame. Most of us make our contributions in relative obscurity, which is actually a GOOD thing, because our small companies and our communities and our schools and our local governments all benefit from having smart people around seeing what others don’t see and coming up with creative solutions to local problems. We might even want to confess our doubts that everything deserves our very best. Very Best can be in short supply, and setting priorities around who and what deserves it, under which conditions, and making peace with making offerings that are “good enough,” can be an investment in warding off anxiety and obsession.

Not everyone makes ground-breaking discoveries Most really smart folks DON’T attend the Ivy League schools (They don’t actually have space for all of us!) And it’s really ok. The Buddhists speak of how even in the face of great enlightenment, we must all still chop wood and carry water. There is a vast range of “good enough” out of which millions of people make happy, productive lives, without ever achieving perfection. We’re allowed to do that, too.